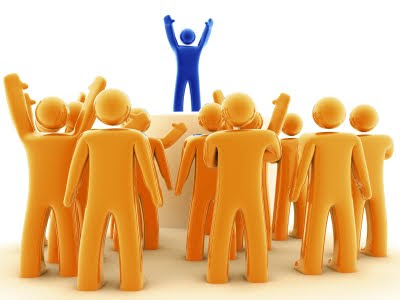 "Leadership cannot really be taught. It can only be learned."— Harold Geneen

"Look over your shoulder now and then to be sure someone's following you."— Henry Gilmer

"Don't be afraid to take a big step when one is indicated. You can't cross a chasm in two small steps" - David Lloyd George

"I think that the best training a top manager can be engaged in is management by example. I want to make sure there is no discrepancy between what we say and what we do. If you preach accountability and then promote somebody with bad results, it doesn't work. I personally believe the best training is management by example. Don't believe what I say. Believe what I do."— Carlos Ghosn

"It doesn't take great men to do things, but it is doing things that makes men great" - Arnold Glasgow

"To govern is always to choose among disadvantages" - Charles de Gaulle

"The people we get along with, trust, feel simpatico with, are the strongest links in our networks" - Daniel Goleman

"Be yourself, who else is better qualified" - Frank J Giblin II

"I will listen to anyone's convictions, but please keep your doubts to yourself" - Goethe

"Treat people as if they were what they ought to be, and you help them to become what they are capable of being" - Goethe

"Whatever you do, or dream you can, begin it. Boldness has genius, power and magic in it. Begin it now." - Goethe

"You cannot teach a man anything. You can only help him discover it within himself" - Galileo

"Leadership is practiced not so much in words as in attitudes and in actions." - Harold Geneen

"I suppose leadership at one time meant muscles; but today it means getting along with people." - Indira Gandhi

"If you have some respect for people as they are, you can be more effective in helping them to become better than they are" - John W Gardner

"If you really want something, work hard, take advantage of opportunities, and never give up, you will find a way" - Jane Goodall

"Josh Billings said, "It is not only the most difficult thing to know oneself, but the most inconvenient one, too." Human beings have always employed an enormous variety of clever devices for running away from themselves, and the modern world is particularly rich in such stratagems. " - John W Gardner

"Leaders come in many forms, with many styles and diverse qualities. There are quiet leaders and leaders one can hear in the next county. Some find strength in eloquence, some in judgment, some in courage" -John W Gardner

"Life is the art of drawing without an eraser. " - John W Gardner

"Men of integrity, by their very existence, rekindle the belief that as a people we can live above the level of moral squalor" - John W Gardner

"The idea for which this nation stands will not survive if the highest goal free man can set themselves is an amiable mediocrity. Excellence implies striving for the highest standards in every phase of life. " - John W Gardner

"The idea for which this nation stands will not survive if the highest goal free man can set themselves is an amiable mediocrity. Excellence implies striving for the highest standards in every phase of life. " - John W Gardner

"Whoever I am, or whatever I am doing, some kind of excellence is within my reach" - John W Gardner

"The truly great man is he who would master no one, and who would be mastered by none" - Kahlil Gibran

"The weak can never forgive. Forgiveness is the attribute of the strong" -Mahatma Gandhi

"You can chain me, you can torture me, you can even destroy this body, but you will never imprison my mind" - Mahatma Gandhi

"We became uncompetitive by not being tolerant of mistakes" - Roberto Goizueta

"Companies that succeed are driven by internal ambition. Stock price doesn't drive them. Ambition and values drive them" - Sumantra Ghoshal

"Competent people are the most resistant to change" - Seth Godin

"You have to create tension between reality and aspiration" - Sumantra Ghoshal

"I know no method to secure the repeal of bad, obnoxious, or unjust laws so effective as their strict execution" - Ulysses S. Grant

"The art of war is simple enough. Find out where your enemy is. Get at him as soon as you can. Strike him as hard as you can, and keep moving" -Ulysses S. Grant

"If you hear a voice within you saying, "You are not a painter," then by all means paint...and that voice will be silenced" - Vincent Van Gogh

"Man is not on the earth solely for his own happiness. He is there to realize great things for humanity" - Vincent van Gogh

"I skate where the puck is going to be, not where it has been" - Wayne Gretzky

"The best is he who calls men to the best. And those who heed the call are also blessed. But worthless who call not, heed not, but rest."— Hesiod

"Your position never gives you the right to command. It only imposes on you the duty of so living your life that others may receive your orders without being humiliated."— Dag Hammarskjöld

"How do you know you have won? When the energy is coming the other way and when your people are visibly growing individually and as a group."— Sir John Harvey-Jones

"Experience is not what happens to a man. It is what a man does with what has happened to him" - Aldous Huxley

"Competition is healthy ... but there is more to life than winning or we should nearly all be losers" - Charles Handy

"Power flows to the man who knows how. Responsibilities gravitate to the person who can shoulder them" - Elbert Hubbard

"Progress comes from the intelligent use of experience" - Elbert Hubbard

"The leader has to be practical and a realist; yet he must talk the language of the visionary and the idealist." - Eric Hoffer

"You don't have to be a fantastic hero to do certain things - to compete. You can be just an ordinary chap, sufficiently motivated to reach challenging goals" - Edmund Hillary

"Adversity has the effect of eliciting talents, which, in prosperous circumstances, would have lain dormant." - Horace

"Every age has its problem, by solving which, humanity is helped forward" -Heinrich Heine

"The soul is dyed the color of its thoughts. Think only on those things that are in line with your principles and can bear the light of day. The content of your character is your choice" - Heraclitus

"It is by work that man carves his way to that measure of power which will fit him for his destiny" - Josiah G. Holland

"Never believe there is something you cannot do until proven otherwise." -Joshua Hill

"Whether or not we realize it each of us has within us the ability to set some kind of example for people. Knowing this would you rather be the one known for being the one who encouraged others, or the one who inadvertently discouraged those around you?" - Josh Hinds

"Whatever the mind of man can conceive, it can achieve" - Napoleon Hill

"An undefined problem has an infinite number of solutions." - Robert A Humphrey

"There is something that is much more scarce, something rarer than ability. It is the ability to recognise ability" - Robert Half

"The very essence of leadership is [that] you have a vision. It's got to be a vision you articulate clearly and forcefully on every occasion. You can't blow an uncertain trumpet" - Theodore Hesburgh

"Hope is definitely not the same thing as optimism. It is not the conviction that something will turn out well, but the certainty that something makes sense" - Vaclav Havel

"People do not lack strength; they lack will" - Victor Hugo

"The truth is not simply what you think it is; it is also the circumstances in which it is said, and to whom, why and how it is said" - Vaclav Havel

"The task of the leader is to get his people from where they are to where they have not been."— Henry Kissinger

"You don't lead by pointing and telling people some place to go. You lead by going to that place and making a case."— Ken Kesey

"All wars are waged against children" - Eglantyne Jebb

"Relief work does not consist entirely in wearisome appeals ... it has its moments of enchantment, its adventures, its unexpected vistas into new worlds" - Eglantyne Jebb

"A community is like a ship; everyone ought to be prepared to take the helm" - Henrik Ibsen

"Avoiding danger is no safer in the long run than outright exposure. Life is either a daring adventure, or nothing." - Helen Keller

"I make more progress by having people around who are smarter than I am - and listening to them. And I assume that everyone is smarter about something than I am" - Henry J. Kaiser

"Don't compromise yourself. You are all you've got" - Janis Joplin

"History is a relentless master. It has no present, only the past rushing into the future. To try to hold fast is to be swept aside" - John F. Kennedy

"Its not what you are that counts, but what people think you are" -Joseph Kennedy

"Leadership and learning are indispensable to each other" - John F. Kennedy

"Leadership has a harder job to do than just choose sides. It must bring sides together." - Jesse Jackson

"Mistakes are the portals of discovery" - James Joyce

"Some men see things as they are and say why. I dream of things that never were and say why not" - John F. Kennedy

"A leader's dynamic does not come from special powers. It comes from a strong belief in a purpose and a willingness to express that conviction" -Kouzes & Posner

"Be creative. Use unconventional thinking. And have the guts to carry it out" - Lee Iaccoca

"Management is nothing more than motivating other people" - Lee Iacocca

"You can have brilliant ideas, but if you can't get them across, your ideas won't get you anywhere" - Lee Iacocca

"If we are to go forward, we must go back and rediscover those precious values" - Martin Luther King, Jr

"Obstacles don't have to stop you. If you run into a wall, don't turn around and give up. Figure out how to climb it, go through it, or work around it" -Michael Jordan

"The fastest way to succeed is to look as if you're playing by somebody else's rules, while quietly playing by your own" - Michael Korda

"You don't have to see the whole staircase, just take the first step" -Martin Luther King

"It's alright to be Goliath, but always act like David" - Phil Knight

"The morale of an organization is not built from the bottom up; it filters from the top down" - Peter B. Kyne

"Only those that dare to fail greatly can ever achieve greatly." - Robert Francis Kennedy

"Press on. Nothing in the world can take the place of persistence" - Ray A. Kroc

"Thinkers, makers and traders are the DNA of the world class company" -Rosabeth Moss Kanter

"Freedom is necessary for honesty, honesty for integrity, integrity for power, power for creativity, and all of them for intimacy" - Sonia Johnson

"Sometimes when you innovate, you make mistakes. It is best to admit them quickly, and get on with improving your other innovations" - Steve Jobs

Most Viewed this week