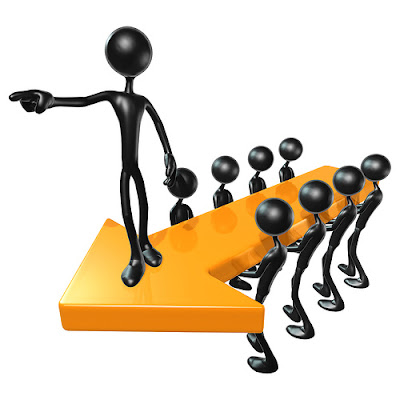 ”Success seems to be connected with action. Successful people keep moving. They make mistakes, but they don’t quit.”
- Conrad Hilton

”The right man is the one who seizes the moment.”
- Johann Wolfgang von Goethe

”Be enthusiastic as a leader. You can’t light a fire with a wet match.”
- Unknown

”Leaders must be close enough to relate to others, but far enough ahead to motivate them.”
- John Maxwell

”There comes a moment when you have to stop revving up the car and shove it into gear.”
- David Mahoney

”Leadership and learning are indispensable to each other.”
- John F. Kennedy

”Never try to teach a pig to sing: it wastes your time and it annoys the pig.”
- Paul Dickson

”Surround yourself with the best people you can find, delegate authority, and don’t interfere as long as the policy you’ve decided upon is being carried out.”
- Ronald Reagan

”Management is efficiency in climbing the ladder of succes; leadership determines whether the ladder is leaning against the right wall.”
- Stephen R. Covey

”A desk is a dangerous place from which to view the world.”
- John Le Care’

”The day soldiers stop bringing you their problems is the day you have stopped leading them.”
- General Colin Powell

”You can have brilliant ideas, but if you can’t get them across, your ideas won’t get you anywhere.”
- Lee Iacocca

”Outstanding leaders go out of their way to boost the self-esteem of their personnel. If people believe in themselves, it's amazing what they can accomplish.”
- Sam Walton

”The price of greatness is responsibility.”
- Winston Churchill

”The pessimist complains about the wind. The optimist expects it to change. The leader adjusts the sails.”
- John Maxwell

”Effective leadership is not about making speeches or being liked; leadership is defined by results not attributes.”
- Peter Drucker

”There is something that is much more scarce, something rarer than ability. It is the ability to recognize ability.”
- Robert Half

”How far would Moses have gone if he had taken a poll in Egypt?”
- Harry S. Truman

”If the blind lead the blind, both shall fall in the ditch.”
- Jesus Christ

”All of the great leaders have had one characteristic in common; it was the willingness to confront unequivocally the major anxiety of their people in their time. This, and not much else, is the essence of leadership.”
- John Kenneth Galbraith

”The task of the leader is to get his people from where they are to where they have not been.”
- Henry Kissinger

”Great leaders are almost always great simplifiers, who can cut through argument, debate, and doubt to offer a solution everybody can understand.”
- General Colin Powell

”Motivation is the art of getting people to do what you want them to do because they want to do it.”
- Dwight Eisenhower

”Leadership is the activity of influencing people to cooperate toward some goal which they come to find desirable.”
- Ordway Tead

”Any business or industry that pays equal rewards to its goof-offs and eager beavers sooner or later will find itself with more goof-oofs than eager beavers.”
- Mick Delaney…

”There is a powerful driving force inside every human being that once unleashed can make any vision, dream, or desire a reality.”
- Anthony Robbins

”Success is the maximum utilization of the ability that you have.”
- Zig Ziglar

”Obstacles are those frightful things you see when you take your eyes off your goal.”
- Henry Ford

”If there is a trait which does characterize leaders it is opportunism. Succesful people are very often those who steadfastly refuse to be daunted by disadvantage and have the ability to turn disadvantage to good effect. They are people who seize opportunity and take risks. Leadership then seems to be a matter of personality and character.”
- John Viney

”Things may come to those who wait, but only what’s left behind by those that hustle.”
- Abraham Lincoln

”Don’t wait for your ship to come in, swim out to it.”
- Unknown

”Nothing splendid has ever been achieved except by those who believed that something inside of them was superior to circumstance.”
- Bruce Barton

”It is in your moments of decision that your destiny is shaped.”
- Anthony Robbins

”The life which is unexamined is not worth living.”
- Plato

”Only those who dare to fail greatly can ever achieve greatly.”
- Robert Francis Kennedy

There is plenty of room at the top – but no place to sit down.”
- Unknown

”The supreme quality for leadership is unquestionably integrity. Without it, no real success is possible, no matter whether it is on a section gang, a football field, in an army, or in an office.”
- Dwight D. Eisenhower

”Beginning is half done.”
- Unknown

Most Viewed this week